Welcome to the Honig Breethuis 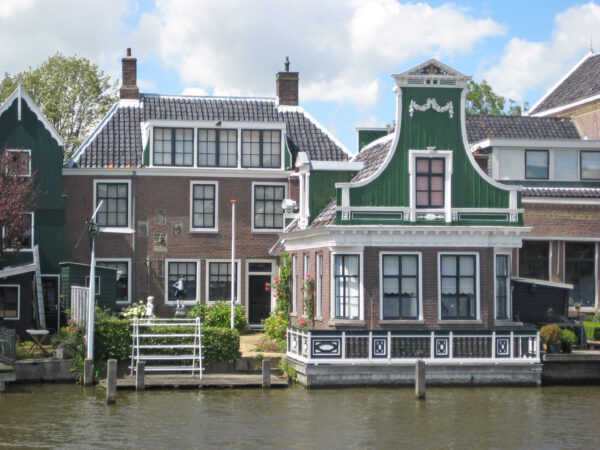 The former residence of the entrepreneurial families Honig and Breet, which is now a museum home, can be found in the picturesque village of Zaandijk. Its previous residents worked in the manufacture of white paper, an industry in which their company C. & J. Honig Breet played a central role. Cornelis Jacobsz. Honig (1683-1755), co-founder of the paper company, had the house built by the Zaan river in or around 1709.
Our guides will be happy to take you on a tour of the former factory home. They will tell you about the history and lives of the families who lived here, as well as the historic furnishings and the hand-painted wallpaper. After the tour, you can enjoy a cup of tea or coffee in the Zaankamer room, like the former residents did, while admiring the view of the river Zaan and the garden.

History of the occupants

Jacob Cornelisz. Breet (1778-1847) and Grietje Jans de Jager (1776-1837) lived in the Honig Breethuis during the second quarter of the 19th century with their two youngest children, Maartje (1807-1885) and Jan (1815-1892). In 1830 Jacob Breet commissioned the Amsterdam wallpaper painter, Willem Uppink (1767-1849), to decorate the Garden Room. Behind the residence, a summer house was built with a view of the Zaan and featuring the impressive Zaankamer room. The museum presents a reconstruction of how the property was in this phase, from 1826 to 1847.

In 1892 the Zaanlandsche Oudheidkamer (Zaanland antiquities room) opened its doors, a short distance away on the Lagedijk. Jan Jacobsz. Breet was one of the parties who lent pieces to the new establishment. After his death that same year, the building stopped being used as a residence. In 1893 this home, described as ‘decorated extremely lavishly’, was sold by public auction. On 14 December 1940 the building was designated as a museum, as the Zaanland antiquities room and later the Zaans Historic Museum. In 1999, after the establishment of the Zaans Museum, the interior of the former factory home was restored and became the Honig Breethuis museum home.

As of 6 November 2021 you will need a coronavirus entry pass for the Honig Breethuis. Visitors must show their personal QR code and a valid form of ID. Basic rules stay in force: wash your hands thoroughly and regularly. If you have symptoms, stay at home and get tested as soon as possible.